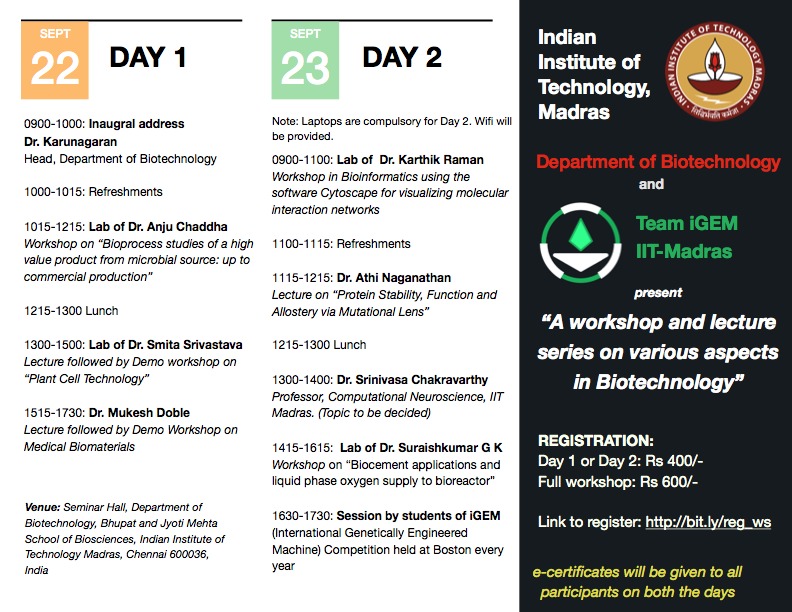 Click here to register for our workshop
What is iGEM?

The International Genetically Engineered Machine (iGEM) competition began in January 2003 as an independent study course at the Massachusetts Institute of Technology (MIT) which later became a summer competition with 5 teams in 2004. It has now expanded to 310 teams in 2017, reaching more than 40 countries.

iGEM is the premiere student competition in synthetic biology. Student teams are given a kit of biological parts and work over the summer to build and test biological systems in living cells, ranging from bacteria to mammalian cells.

IIT Madras has participated in 9 editions of iGEM since 2008. Our achievements are listed below:

ChassiDex is an open source, easy to access database of host organisms and tools to work with them. Researchers are increasingly opting to work with unconventional organisms as they have unique advantages over common model organisms, but characterization of these organisms haven't been documented extensively. ChassiDex provides information about growth and maintenance conditions of such different organisms with applications in synthetic biology, protocols, parts, vectors and other data required to work with them, all in one place.
Outreach in Indian Languages

It has been observed that the public does not have a clear purview of the research and findings in biotechnology, so much so that a basic know-how of genetics is also not common and the brunt of the decisions in public domain like that of GMO use falls into the hands of lobbyists.

Hence, we've begun to make and spread content about the basics of biotech in a commoner's language. Since we live in country of diversity where English is not the primary language for most, we are making the content available in different languages like Kannada, Tamil, Telugu, Marathi, Hindi, Bengali, and Gujarati.

Acinetobacter baylyi, is a naturally competent, non pathogenic, nutritionally versatile organism which opens up many new opportunities for metabolic engineering and synthetic biology. Well known is its ability to degrade aromatic compounds. Unfortunately, however, A. baylyi does not currently possess the extensive literature and tool-sets available for gene-manipulation and synthetic biology like the E. coli, P. putida and L. lactis organisms do. This has impeded the use of A. baylyi in studies. This year we tackle this problem for our iGEM18 project. We intend to create a library of synthetic promoters for A. baylyi along with other important tools, thus encouraging and providing access to research laboratories and industry alike to use Acetinobacter baylyi as their chassis.
Support Us!
We are in need of financial support to participate in iGEM 2018.
If you like our work and are interested to support us, kindly reach out to us to support us.